This letter from Jan William TeSelle was sent to Margaret TeSelle.  She had married Jack Fries in 1934.  Jan Willem TeSelle was always inventing farm implements which he showed freely to all.  He never applied for a patent (no record of such has been found).

Firth, Nebr. Feb. 7, 1939 Mr. + Mrs. J. Fries, Dear Margie. Your letter and present received. The biggest present I got for the occasion. Thanks. My birth day came off quite pleasantly this time. On Jan. 30 all the brothers and sisters had a surprise on me. And on Jan. 31 the young people had a supper at the church and a program with some negro singers from Lincoln. They dedicated one song to me: “The old time religion,” to which I responded and the audiance heartily applauded. Had letters also from Lillie + Eugene’s family. Lillie + Sherman were spending a vacation in Peoblo at that time. Am now trying to answer all of you, which is quite a problem for me. But as I wrote to Lillie also, tho I scarcely write to you once a year, I never forget to pray for you children at least once a day. You have probably heard that John Van Engen (your cousin) from Adams, fell out of a tree and broke his back. He is in a hospital at Lincoln. Doctors say he can not live. John Van Engen Sr. + Will from Colo. were over here last week. We are all well. I still feel spry. And I am as busy as ever. 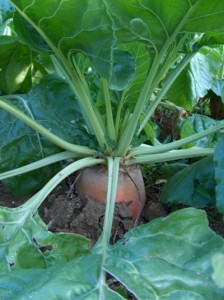 Lately I have been tinkering with a beet drill, which I got to working fine as it seems. Am going to raise more of the “Mangelwurzel”[1. Mangelwurzel (German) or Mangelwortel (Dutch) or Fodder Beet: A cultivated root vegetable with large white, yellow, or orange-yellow swollen roots, which was developed in the 18th century as a fodder crop for feeding livestock. Fodder beets are close relatives of the sugar beet, but with a much lower sugar content. Both are called “Beta vulgaris” in Latin. (Source: Wikipedia) In Eastern Netherlands fodder beets can often be seen growing in the fields. The fodder beet, formerly called “mangold”, served as the primary feed for the cattle until the main winter feed corn crop was ready. The fodder beets, which are like corn silage, had to be cut into smaller pieces with a beet cutter before they could be thrown to the cows. That was a very time-consuming job, so naturally farmers in the 1860’s and 1870’s preferred to switch to the much less laborious feed corn as soon as it was available.] that you saw. Had 150 baskets of them, but the cow wants still more. I built a wood-splitter that draws more attention than anything I ever made. There must have been some 200 people that came to look at it. They usually come in little groups. Many of them ask where did you get the idea? And yet the idea and construction of it are very simple. Now I hear of others that are trying to build one like it. The winter has been unusually pleasent thus far. Had no zero wethe. Ploughed a piece of garden on the 6th of Jan. No frost in the ground. January seemed like March every day. Our next door neighbors cam back from California yesterday. She says se likes it better here. Our music teacher is busy Phyllis behind my back, which makes writing still more difficult. Yours with fatherly love and Gods blessings. Let us hear from you soon again. J.W. TeSelle