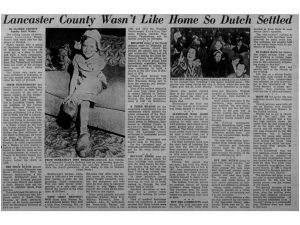 How much do you know about the early Dutch settlers in the American Midwest, some of whom are your ancestors? Have you ever wondered how those early Dutch immigrants managed to create homes, stay healthy, educate their children, celebrate their religion, farm the land, and create a prosperous life in the primitive, unsettled prairie lands of Nebraska?

Fortunately, in 1938 Mr. Gustav Adolph Bade (1892-1949) wrote a thesis called, “A History of the Dutch Settlement in Lancaster County, Nebraska”, which answers many of those questions. Mr. Bade’s thesis was presented to the Faculty of the Graduate College in the University of Nebraska on July 6, 1938, in partial fulfillment of requirements for the degree of Master of Arts, Department of History.

In 1952 the Lincoln Star newspaper wrote a lengthy article, entitled “Lancaster County Wasn’t Like Home, So the Dutch Settled!” This article was largely based on Gustav Bade’s Master’s thesis. This comprehensive document begins in 1856, when the first “white man” took up residence in Lancaster County, in the southeastern corner of Nebraska. By the 1860s, there was a steady flow of settlers, including three te Selle brothers–Jan Hendrik, Gerrit Jan, and Harmen Jan te Selle, who had immigrated to the United States from Winterswijk, Netherlands, along with many other Dutch families. 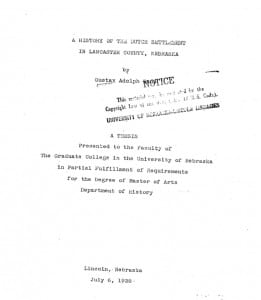 Follow the links above to read Mr. Bade’s findings and comments about the struggles, sacrifices, and successes of numerous Dutch families as they adapted their lives to their new surroundings. The Bade thesis will help you imagine how your ancestors and their Dutch friends managed to create a new life for themselves in the primitive prairie lands of the new Nebraska territory.

We first learned about the Bade thesis in 2006, when we received a photocopy of the original manuscript from Ms. Ione Heinen of Sheboygan Falls, Wisconsin. Ione was an avid genealogist who tracked the family histories of numerous Dutch families that had originally settled in the Sheboygan area, and who later moved to Nebraska. One of this website’s authors, Robert TeSelle, traveled to Sheboygan in 2006 to meet with Ione and to do some genealogical research about the TeSelle Family at the Sheboygan County Historical Research Center (SCHRC). Robert was particularly interested in the Bade thesis, since Gustav’s sister, Clara Bade TeSelle, is Robert’s great-aunt.

We later learned that Kenneth Zimmerman and Elaine Obbink Zimmerman had published a commercial version of the Bade thesis in 2001, in which they had added a complete index of the document. This commercial version is available from Family Threads Genealogy, a firm owned by Kenneth Zimmerman and Elaine Obbink Zimmerman. Elaine’s family immigrated from the Netherlands to America in 1867.  Mr. Derk Jan Englebart Obbink was a pioneer to Holland, Lancaster County, Nebraska. As of 2001, the Obbink family was still farming in Lancaster County, Nebraska.