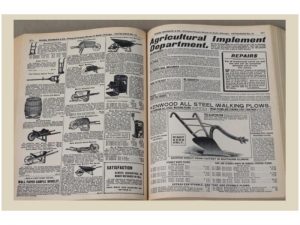 Although Sears has been in a downward spiral for quite some time, the company’s recent declaration of bankruptcy made the situation much more real to me. I began to reflect on the role that Sears Roebuck played for many years in my life and in the lives of my family members.

Beginning in the midwestern United States in the late 1880s, Sears Roebuck was the original Amazon-type retailer — a centralized brick-and-mortar warehouse and distribution center in Chicago, connected to customers remotely using the ubiquitous Sears Roebuck catalog, long before online internet websites were conceived. Sears successfully educated its customers about how to do mail order shopping — browsing the catalog pictures and descriptions, sending orders and payments by mail, returning merchandise if necessary, and taking advantage of the new government Rural Free Delivery (RFD) Act of 1896 to utilize low-cost mail delivery throughout rural areas of the country.

My parents both grew up in the early 1900’s on modest farms in Nebraska. My mother’s parents owned a farm near Grand Island, in central Nebraska. My dad’s parents (my grandparents), Herman John TeSelle (1888-1963) and Jennie Vandewege TeSelle, owned a farm near Firth, south of Lincoln in the eastern part of the state. That farm was the original homestead property of Herman John’s father and namesake, Harmen Jan te Selle (1844-1919). Coincidentally, Herman John was born in 1888, just about the same time that the first Sears catalog was published by the Chicago retailer. (Follow this link to see images of old Sears catalog pages.)

Both my mother and father remembered having a Sears catalog around their respective farmhouses when they were growing up in the 1920s and 1930s. The catalog was the source for essential household items, such as clothes, appliances, tools, etc. But more than that, the catalog inspired children and adults alike to dream about possible Christmas presents, fashionable clothes, watches and jewelry, sporting equipment, sewing machines, or new-fangled gadgets for the home or workshop. The Sears catalog and mail order system became an integral part of family life in the midwestern United States.

When I was a young boy in California in the 1940s and early 1950s, the Sears catalog definitely played a prominent role in our household. Sears products were everywhere. Our appliances and vacuum cleaner were Kenmore. Dad’s tools in the garage were Craftsmen. Replacement tires and batteries for our cars carried the Allstate brand, as did our auto insurance. My school jeans were Tough Skins, and most of my underwear, socks, pajamas, etc. came from Sears as well. At Christmas time I remember writing a wish list of item names and page numbers from the Sears catalog, hoping that Santa might have a Sears catalog at his North Pole workshop, so he would clearly understand what I wanted for Christmas.

As my sister and I got older and didn’t require as much supervision at home, my mom eventually went to work for Sears in the credit department at the Glendale, California store, not too far from where we lived. Sears had been an early adopter of customer credit, offering proprietary store charge plates to its customers during the first half of the 1900s. These metal charge plates were replaced with plastic store credit cards beginning in the 1950s, but these credit cards were still only good at Sears stores. By the mid-1960s, banks were issuing general purpose credit cards, good at many different stores. Sears eventually joined that movement in 1985 by creating the Discover card, attempting to capitalize on the huge base of existing Sears credit customers.

Mom enjoyed working at Sears. The family welcomed the extra income, and we frequently benefitted from the Sears employee discount. Sears also offered a generous employee benefits package. As kids, we spent a lot of time exploring the aisles of Sears with Mom and/or Dad. We were definitely a Sears family during the 1940s, 50s, and 60s.

In many ways, the history of the growth of Sears Roebuck is the story of the growth and prosperity of middle America. Several enlightening articles have been written during the past several months about Sears. Take a look at some of these articles as well as the Sears Archives if you are interested in revisiting the company’s history and legacy:

The Rise and Fall of Sears — Smithsonian.com

The History of Sears Predicts Nearly Everything Amazon Is Doing

How did Sears Roebuck affect you, your family members, and your ancestors? Did any of your family build or live in a pre-fabricated house from Sears? If you have personal memories, anecdotes, or family stories about Sears Roebuck, please send them to us using our website Contact Form. We will share them here on our website. We look forward to hearing from you.