The following article appeared in The VOICE NEWS, Thursday, September 4, 2003, on Page 26, Section 2. The VOICE NEWS is headquartered in Hickman, Lancaster County, Nebraska. 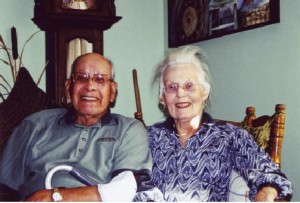 Russell and Norma Prophet may be retired, but they stay busy with many artistic pursuits. One cannot walk into their home without getting an instantaneous feel for their interesting personal history, and Norma’s artistic and musical gifts are evident throughout the couple’s home.

The Prophets have eclectic life experiences;
history of kindness, generosity, and artistic pursuits

As they walk down the road of life together, Russell and Norma TeSelle Prophet can look back to see a colorful variety of stones with which they have paved their way. From singing to sewing, writing, to WAVES [“Women Accepted for Volunteer Emergency Service“], Norma has led an eclectic life, and Russell has been fully by her side for over 60 years.

No stranger to newsprint, Norma worked at The VOICE for over ten years before retiring in 2000. While employed at the newspaper, Norma wrote a number of feature articles and the cook of the week column, plus doing some typesetting. Her favorite stories were those about the end of World War II when she was able to talk to war veterans.

In the last few years at the newspaper she adjusted to the many technological changes and learned computer software programs like Pagemaker, along with the rest of the staff. She contributed to the typesetting duties and worked the long days along with much younger staff members.

Jan Kroese, The VOICE office manager for the last 20 years said, “We both loved classical music and so we enjoyed listening to that together and we helped each other. She was a great gal to work with. She had many talents.”

And it’s no wonder, for Norma herself was a WAVES during that time. After boot camp in New York and Yeoman School in Stillwater, Oklahoma, she wound up in Washington, D.C., working as a secretary. In fact, Norma was there both as a civilian after graduating from high school and business school as well as with the military. It was there that Norma and Russell met prior to his military service.

Once Norna and Russell were married, the two lived in Oklahoma. Russell received his Bachelor’s and Master’s Degrees in Stillwater while Norma worked at the Department of Home Economics. After Russell’s graduation, the couple moved to Tulsa where he took a job as an auditor with the Agriculture Department. Then, in 1977, a farm owned by Norma’s mother and uncle went up for auction. Having been in the family since it was homesteaded by her grandfather, Henry Dietz, Norma was interested in purchasing the land. The Prophets moved back to Nebraska and, in spite of a series of “retirements,” the two continued to be active, Russell with janitorial work at First State Bank, and Norma at the newspaper office.

Although she enjoyed her job at The VOICE, Norma admits to eventually losing her enthusiasm for doing the cooking column. Fortunately, she was given the opportunity to submit a series of columns of a historical nature; something which is more suitable to her tastes. The series has its genesis in a quest instigated by Norma more than forty years ago when she first asked her father where her grandfather was born. Unable to find any further information from relatives beyond possible roots in the Netherlands, Norma went to the library in Tulsa, Oklahoma, where she was living at the time. There, she scoured the telephone books of major cities across the United States, searching for other TeSelles in America. After finding listings in California, Arizona, and Montana, Norma came into contact with someone in Wisconsin whose neighbor was going to the Netherlands and agreed to research the name for her there. The year was 1959, and thanks to those strangers, Norma eventually heard from an English-speaker there who was able to help her on her mission. From these letters, Norma’s latest column was born featuring letters by the three TeSelle brothers who came to the Firth area in the early 1870s. The “Dutch Letters Tell of Coming to America” feature recently concluded in the newspaper and several readers commented on how interesting they found the correspondence.

But The VOICE is not the only place where Norma has applied her pen. After answering a request for essays on “What electric light means to me,” Norma’s letter was printed in a book called “Circle of Brightness” published by the George W. Norris Foundation. Writers from seventeen states responded.

In true “right-brain” fashion, Norma is not only gifted with writing abilities, but was also at one time a singer. While in Tulsa, she worked for an organization called Sweet Adelines, which is an organization for women who sing four-part harmony, barbershop style. The organization began in Tulsa after WWII and now has chapters throughout the United States, Canada, and Europe. There, she worked her way up to executive secretary. During her sixteen years at the organization’s headquarters, she not only worked in the office, but was a singer for them as well.

Complementing her musical talent is a gift for artistry. While Norma lived in Tulsa, she went to night school for seven years, majoring in art. After earning her Bachelor of Fine Arts degree in painting from the University of Tulsa in 1977, Norma could not always find the time to indulge in the hobby, but she does still paint a wide variety of artwork. Because she dislikes the smell of turpentine in the house, she tends to stick with water colors and acrylics, and occasionally, one of her paintings becomes a gift.

Perhaps one of her best endowments, however, is her ability to sew well. Admonishing her daughter Su Zanna to choose clothing that would set her apart from the mainstream, Norma made her clothes for years. Now living in Iowa, Su Zanna has come to appreciate that legacy as she sews frequently as well.
The VOICE Publisher Linda Bryant added, “Norma always stood out from the crowd because her clothes were unique down to her winter coat and matching hats. She was such a tiny lady and always neat and prim and proper with her blonde hair up in a bun on top of her head, not a hair out of place.”

“But what really made Norma stand out was her compassion and kindness for others. She did so many thoughtful things for me over the years. When I was pregnant and on bed rest, she would bring me a fresh bouquet from her garden every month because we shared a love of flowers, although Norma never brought them indoors because although she loved gardening, she didn’t like to smell the flowers.”

“Norma was a good influence on everyone in the office. For example, if a crabby customer would come in, she would always remind us that we didn’t know what other burdens they faced today that made them so unpleasant. She also chided anyone who even started to gossip about someone in the news. I never heard her gossip and in the newspaper business that’s pretty rare with all the stories we cover and all the family histories that come into the newsroom,” Linda continued. “I never remember her saying anything unkind about anyone, but she would do a “tsk, tsk” and shake her head when learning that someone was in trouble with the law and it ended up in print.”

Their son Bob lives down the road and looks in on the couple daily in their neat brick home, but the flower beds are gone, Norma no longer has the energy for gardening. She doesn’t spend any time sewing new articles of clothing, just a little mending these days. She doesn’t write features for the newspaper, although she is quick to point out typos she notices. She doesn’t sing in public performances anymore, except maybe with the congregation at the Firth Reformed Church where they have faithfully attended for many years.

Linda added, “The one talent that has persevered with the passing years is her compassion and thoughtfulness. For every special occasion or accomplishment in our family (and I’m sure in many other families) comes a thoughtful note, one of Norma’s design. Now that’s a legacy.”