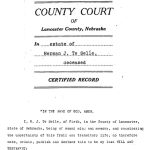 Harmen Jan te Selle died June 22, 1919. In his Last Will, dated February 3, 1919, Harmen Jan te Selle directed that his land and other assets be divided among all of his twelve living children through various combinations of land and cash. Five of his sons — William, Herman, Benjiman [sic], John, and Gerrit received land only, and they also were obligated to pay some cash to the other children and to their mother, Johanna. In addition to cash from their brothers, the other children, except Evert, received proceeds of the sale of some other land in Hayes County and in Holland, Nebraska. According to HJT’s Will, son Evert was also eligible to receive the same share as the other children, provided that Evert first repaid to the estate an unpaid loan of $5,000 from Harmen Jan, which Evert had apparently never repaid!

Among the materials included in the 1989 Reunion Panels was a 1921 plat map of Nebraska South Pass Township, just northwest of Firth. The map was prepared two years after Harmen Jan’s death, so it shows the new ownership of Harmen Jan’s former land by his sons, in accordance with the provisions of his Will. Follow the link to view the plat map and zoom in to see the names of Harmen Jan’s sons, highlighted along with other TeSelles who owned land in that particular township.

The relatively equal division of Harmen Jan te Selle’s assets among all his children was certainly a radical departure from the system of “primogeniture” into which Harmen Jan was born as the youngest of seven brothers.  When Harmen Jan’s father died (Jan Albert te Selle 1800-1845), all his property was inherited by Harmen Jan’s eldest sibling, Derk Willem te Selle (1827-1904). The other six te Selle brothers had to scramble and fend for themselves. This tradition of primogeniture was certainly a factor that influenced the three youngest te Selle brothers to emigrate from the Netherlands to settle in Nebraska. Apparently, when making his Last Will and Testament, Harmen Jan te Selle remembered his own feelings of unfairness and disappointment at being deprived of any inheritance from his own father. (Read the interesting article, “The Right To Stay,” elsewhere in this website, regarding the rights and obligations of inheritance by the eldest son, as customarily practiced in the Achterhoek region around Winterswijk, Netherlands, where Harmen Jan and his brothers were raised.)

In Harmen Jan’s Will there is no mention of his stepson, Manus John Schreurs, who by this time was in his 50’s. Manus was the son of Harmen Jan’s first wife, Berendina Aleida Reusink, by her previous marriage. By all accounts, Harmen Jan treated Manus John as if Manus were his own, providing and caring for him like all Harmen Jan’s other children, even after Manus’ mother died of childbirth complications in March 1876. However, perhaps by the time Harmen Jan prepared his Will in 1919, Manus was well established in the community and had sufficient land of his own, such that Harmen Jan felt that his younger children had more need of land and cash than Manus did. Harmen Jan’s younger sons that inherited his land were only in their 20’s at the time of Harmen Jan’s death.

Harmen Jan te Selle’s Last Will and Testament was shared with us by his great-grandaughter Yvonne Butner. Yvonne’s grandmother was Johanna Marie “Annie” TeSelle (1896-1972), who was Harmen Jan’s youngest child. Yvonne said she found the Will among her grandmother’s memorabilia. Her grandmother “Annie” was married in April 1919, so she was likely still living at home with her parents, Harmen Jan and Johanna, just before Harmen Jan died in June 1919. Annie probably had a copy of Harmen Jan’s Will in her possession, because she would have helped her brother John Henry TeSelle (1893-1955) administer their father’s estate. John Henry, who would have been about 26 years old, was named by his father as the Executor of the Will. Their mother, Johanna Brethouwer te Selle, survived until 1927.