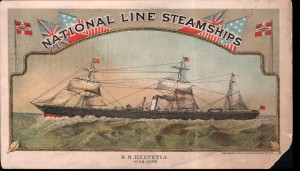 This database is an index to passenger ships. For each ship listed in this database there is a description of it, containing such information as:
– Line sailed under
– Builder
– Ship type
– Tonnage
– Dimensions
– Number of masts and funnels
– Ship history
– Years in service
For about 1,000 ships there will also be an image of the ship (either a photograph or artistic rendering).
Note: This database does not contain a comprehensive list of ships that ever sailed. Additional ships will be added to this database in the future.
]

At the time the te Selle brothers sailed on the S.S. Helvetia, the ship was 371.5 feet long by 41.2 feet wide. These dimensions actually differ from the dimensions quoted by Harman Jan te Selle in Letter 2, where he states that the “ship was pretty big, measuring 460 feet long and 40 wide.” The reason for this discrepancy is unclear.

The HELVETIA was a 3,318 gross ton ship, built in 1864 by Palmer Bros & Co, Jarrow-on-Tyne for the National Line of Liverpool. Her details were – length 371.5ft x beam 41.2ft, clipper stem, one funnel, three masts (rigged for sail), iron construction, single screw and a speed of 10 knots. Launched on November 16, 1864, she sailed from Liverpool on her maiden voyage to Queenstown[2. Queenstown – Cobh

Cobh (Irish: A Cóbh, pronounced “cove”; derived from English the cove) is a seaport on the south coast of Ireland, in County Cork, Republic of Ireland.

The locality, which had had several different Irish-language names, was first referred to as Cove (“the Cove of Cork”) in 1750. It was renamed Queenstown in 1849 to commemorate a visit by Queen Victoria and so remained until the name Cobh (closer to the Irish spelling) was restored in 1922 with the foundation of the Irish Free State.

Cobh is located on the south shore of the Great Island in Cork Harbour, (reputed to be the second largest natural harbour in the world), on slopes overlooking the harbour. On its highest point stands the Cobh Cathedral, St. Colman’s, seat of the diocese of Cloyne.] (Cobh) and New York on March 18, 1865.