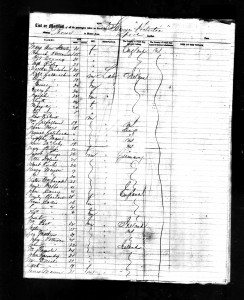 Page 1 of the ship’s manifest for the voyage embarking on October 12, 1865, reads as follows: “List of Manifest of all the passengers taken on board the Steamer ‘Helvetia’, whereof Prouse is Master, from Lpool.” The headings at the top of the Manifest are as follows:

The complete passenger list consists of 23 pages, with a total of 960 names of people registered on board as they departed from Liverpool. This total is consistent with Harmen Jan’s letter, in which he indicated,

“After two days we came to the coast of Ireland; there another two hundred men joined us in a small boat. Subsequently, we were 1200 altogether on that ship.”

Only one person had the entry “Died” next to her name in the passenger list. She appears to have been an infant, since she is listed as part of a family, and no age is indicated. This corresponds with Harmen Jan’s description in his letter, where he wrote about many people being seasick, “but only one child in the age of six months died.” A single death was a very good result during the ocean crossing. Death at sea was likely a common occurrence (see description of earlier voyages, in Castle Garden article), as evidenced by the column in the passenger list pre-printed with the heading “Died on the voyage”.

Although the scanned images of the passenger list appear quite complete, the database contains no scanned image of the cover sheet for the voyage, which presumably would have shown the date of departure and the date of arrival. We must rely on Harmen Jan’s letter to give us the October 12 departure date. The arrival date of October 30, 1865, appears in the database listing, although there is no scanned source document that shows that date. 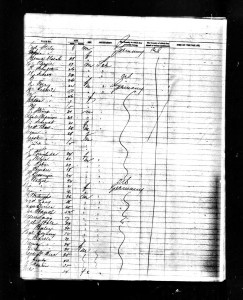 Apparently, the person recording the names on the manifest did not feel that the “te” in the name “te Selle” was important.

Harmen Jan’s letter also mentions traveling with a man from America by the name of “J. Vogel, who had fetched his family from Holland.” The names of the Vogel family members appear on page 12 of the passenger list.

Apparently, Mr. J. Vogel and another friend were very helpful to the te Selle brothers on their journey from Winterswijk to Liverpool. According to Harmen Jan,

“On Saturday the 7th of October at 2 in the afternoon we left from there [Rotterdam] for Hull where we arrived Sunday night. But before I proceed I should let you know that we were in the company of 2 Americans. One by the name of J. Vogel, who had fetched his family from Holland. The other had been to Holland just for fun. Those two were of great use to us that way, for they had a good command of English and could speak to the people and then those men told us what we should do. So we arrived at Hull when it was getting dark already, but they told us just to follow them.”