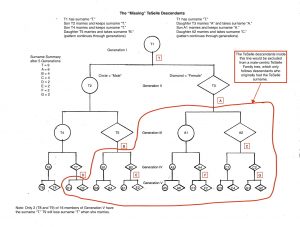 For several years we have been focusing our genealogy studies primarily on the male line of the TeSelle family tree — very sexist, we know, but that was the data we had available from our initial TeSelle Family genealogy, originally published by Geert te Selle (Winterswijk, Netherlands) in the “Yellow Book” in November 1998. At that time there were only limited computerized genealogy programs available. The clerical effort required to manually track all the expanding branches of the family descendants was overwhelming. Consequently, it was common for amateur genealogists to follow a single line of the family descendants. Hence, our early genealogy studies only followed descendants who retained the Te Selle name.

To answer this question, we created the attached chart. People with the original surname TeSelle are identified as T1, T2, etc. People with other original surnames are identified as A1, A2, etc., or B1, B2, etc. However, everyone in the chart is a “TeSelle descendant.” In this way we can determine (1) how many people retain the TeSelle surname; and (2) how many new surnames are introduced into the mix of “TeSelle descendants.”

This chart shows five generations, with Generation I being the “original TeSelle” for whatever particular piece of the TeSelle tree that you wish to analyze. Notice that by Generation V, only two of the 16 TeSelle descendants in Generation V still have the surname TeSelle. One of those two is a daughter, who will lose the TeSelle surname when she gets married.

Of course, the real world is not so simplistic. Most TeSelle ancestors came from families of many more than two children. Also, the number of boys and girls in each family was not evenly balanced. In the not-so-distant history of TeSelles in Nebraska, the three te Selle brothers who immigrated to Nebraska — Jan Hendrik te Selle, Gerrit Jan te Selle, and Harmen Jan te Selle — were three of seven brothers in their immediate family, with no sisters! However, Gerrit Jan te Selle’s son, Jan Albert te Selle had six daughters but no sons!

Our hypothetical model is only intended to demonstrate that the majority of TeSelle descendants do not still have the TeSelle surname. For example, just within the descendants of the three Nebraska Te Selles, there are surnames such as DeBoer, Ten Hulzen, Liesveld, Van der Griend, Obbink, Dietz, Kallemeyn, Fischer, Abbink, Hietbrink, Vene Klasen, Sikkink, and Walvoord — and those are just from the first generation of descendants from the three Te Selle brothers! To really study the history of the TeSelle family, we need to include as many of the TeSelle descendants as possible in our analysis, regardless of their current surname.

We are working hard to expand the TeSelle Family Tree and incorporate the missing descendants into our family genealogy. Soon we will share more details of this expansion project. If you are one of these “missing” TeSelle descendants, or if you know someone who is, please use our Contact Form to help us connect more missing persons to our Family Tree. We are excited about connecting with more of our TeSelle relatives, and we hope you will be, too.