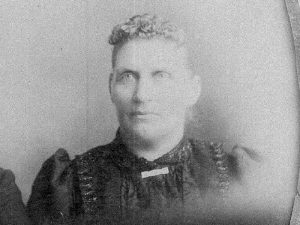 Johanna Arnolda Brethouwer was born on April 10, 1859 in Sheboygan, Wisconsin. She was the daughter of Evert Jan Brethouwer and Helena Vandewege.

On May 7, 1876 in Firth, Lancaster, Nebraska, Johanna married Harmen Jan te Selle, whose previous wife, Berendina Aleida Reusink, had died only two months earlier from complications during childbirth. Harmen Jan had four young children at home with no one to care for them. He quickly courted and married Johanna Arnolda Brethouwer, who became the stepmother and caregiver for Harmen Jan’s young family. Johanna was about 17 years old when she became Harmen Jan te Selle’s “hired girl” to look after step-son Manus John Schreurs and HJ’s children Dela, William, and baby Berendina. They were married shortly after that.

Harmen and Johanna went on to have 13 more children together, although 2 of those children died very young. She additional information about their children on Harmen Jan’s profile page.