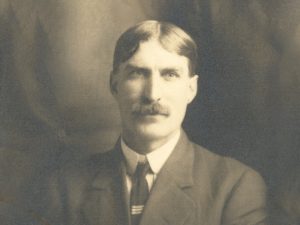 Albert Herman TeSelle was one of Harmen Jan te Selle’s sixteen children, all of whom (except Dela) were born on the family farm in Firth, Lancaster County, Nebraska.

Albert was born in Firth, Lancaster County, Nebraska on 2 July 1880. He was the son of Harmen Jan te Selle and Johanna Arnolda Brethouwer. Albert married Elizabeth Alyda (Lizzie) Obbink on January 29, 1904, in Firth. He died in Bellingham, Whatcom County, Washington on 13 October 1932, as the result of an automobile accident on 3 October. He was buried in Moxee, Yakima County, Washington on 17 October 1932.

Albert and Lizzie had three children, all of whom were born in Firth, Nebraska: