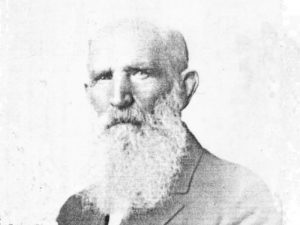 Gerrit Jan emigrated to Nebraska in October 1873, along with his wife, Hannah (Anna) Yonkers (Jonkers) te Selle (1843-1908) and two children. Gerrit Jan wrote Letter 14 (Letters from America) on October 13, 1873, to his mother Dela and his oldest brother, Derk Willem te Selle (1827-1904). In the letter, Gerrit Jan references his ocean voyage from the Netherlands and eventual arrival in Panama, Lancaster County, Nebraska.

Gerrit Jan and Anna Yonkers eventually had seven children who survived to adulthood:

The bold surnames above are for spouses of the TeSelle women. These surnames may be associated with some of  Gerrit Jan te Selle’s descendants, so watch for those names in your genealogy records. When you follow the links above to visit the Profile pages of Gerrit Jan’s children, you will see that we do not yet have a lot of information about most of them. We hope that you, the reader, will be able to provide us with some history and memorabilia about one or more of these TeSelle ancestors. In addition to the Profile pages, please follow the links to the Gerrit Jan te Selle family Gallery and to other Related Content listed below.

The Petition for Naturalization contains some apparent discrepancies that call for a bit of research and logic. First, Gerrit Jan lists his wife as “Janna TeSelle”, even though he was long married to Anna Jonkers. Anna died in 1908, and Gerrit Jan subsequently married Janna Berendina Onnink, to whom he was married in 1914 when he applied for Naturalization.

A second apparent discrepancy is a reference to the ship “Edam”, which Gerrit Jan lists as his transport for his immigration to the United States in 1873. However, subsequent investigations by TeSelle relatives indicate that the ship “Edam” was not even built until the early 1880’s! Passenger logs for 1873 indicate that Gerrit Jan te Selle and his family arrived on a ship named “S.S. Maas”. (See email discussion between various TeSelle relatives about the confusion in the ship names.)

If you have photos, memorabilia, stories, or other information that you are willing to share, and that might be of interest to other family members, please let us know by using the Contact Form, which will be a private message to the website authors. We will send you instructions and a private link so that you can send us your information and digital files.