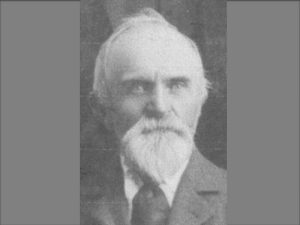 Harmen Jan te Selle (1839-1916) turned out to be quite an itinerant immigrant during his life in the United States. Harmen Jan arrived first in Wisconsin in 1866, moved to Iowa in 1878, and finally settled in Montana from 1891 until his death in 1916. We know very little about his life and activities in any of these places, but we hope to gather information and memorabilia from relatives and descendants who may have old photographs, stories, news clippings, and other memorabilia stored in their garages and attics. If you have information you would like to share, please use the Contact Form to let us know.

In April 1866 at age 27, Harmen Jan left his family and the farm behind and emigrated to the United States. He settled first in Holland Township, Sheboygan County, Wisconsin. He may initially have stayed with family or friends, as there was a substantial Dutch community in that part of Wisconsin.

Harmen Jan eventually met Willemina Johann Ormel (1847-1903), who had emigrated from her home village of Dinxperlo, Netherlands, about 25 km southwest of the Winterswijk area where Harmen Jan was born and raised. Harmen Jan and Willemina Johann married in Holland Township, Wisconsin, on February 14, 1873 — Valentine’s Day, even in the 1800’s. We assume that Harmen Jan earned his living by farming, but we do not have definitive evidence about exactly where they lived or what work he did. The couple had three children during the subsequent five years, all born in Cedar Grove, Sheboygan County, Wisconsin.

Sometime between 1878 and 1880, Harmen Jan moved his family from Wisconsin to the town of West Branch, Cedar County, Iowa, in the southeast corner of the state. We do not know his reason for moving, or what work he did in West Branch. We do know that another son, Benjamin, was born in West Branch in January 1880.

By 1882 Harmen Jan had again moved his family, this time to Orange City, Sioux County, Iowa, in the northwest corner of the state, about 300 miles from West Branch. Another son, Arie, was born in Orange City in February 1882. By 1889, four more children had been born, bringing the total number of Harmen Jan’s children to nine!

Sometime between 1889 and 1891, Harmen Jan decided to move his family once again, this time to the town of Manhattan, Gallatin County, Montana. Although Harmen Jan had been a farmer in the Netherlands, we are not sure what his occupation was in Wisconsin, Iowa, and ultimately Montana. However, a significant Dutch farming community did develop in the late 1800’s around the town of Manhattan in the Gallatin Valley of Montana, northwest of Yellowstone Park. The Gallatin Valley includes both the Eastern Gallatin and Western Gallatin rivers, creating flat, fertile ground. The soil itself was formed from volcanic materials, rich in minerals, making it ideal for dry land farming. [1]

Harmen Jan’s wife Willemina died on February 14, 1903, in Manhattan, Montana, thirty years to the day since she and Harmen Jan were married in Holland Township, Wisconsin. Harmen Jan was left with four teenage children. Harmen Jan appears to have married again in April 1906 with a divorced woman named Emma R. Thompson, who had an 11-year-old daughter named Amber Thompson from her previous marriage. [2]

Here is a list of the children of Harmen Jan te Selle (1839-1916). We often refer to Harmen Jan and his descendants as the “Montana TeSelles.”

For more information about these children and their spouses, see “Descendants of Harmen Jan te Selle (1839-1916).”

If you are a “Montana TeSelle”, or know someone who is, we would love to get additional information, documentation, photos, and other memorabilia about this branch of the TeSelle Family. Please use the Contact Form to get in touch with us.