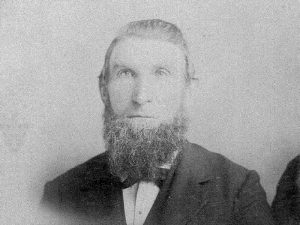 Harmen Jan married his first wife, Berendina Aleida Reusink, on 27 April 1866 in Holland, Sheboygan County, Wisconsin. She was born 29 Jan 1841, Berendiena was a widow, having been previously married to Manus Schreurs. She and Manus had a young son: 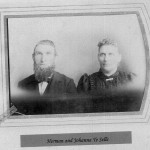 While living in Holland, Wisconsin, Berendina and Harmen Jan had a daughter, Dela. After moving from Wisconsin to Firth, Nebraska, in 1871, with their two children, Manus John and Dela,  Harmen Jan and Berendina had 2 more children: William, and baby Berendina:

Harmen Jan, faced with four small children and no mother in his house, married his second wife, Johanna Arnolda Brethouwer, on 07 May 1876 in Firth, Lancaster, Nebraska. She was born 10 April 1859 in Sheboygan, Wisconsin. She was the daughter of Evert Jan Brethouwer and Helena Vandewege. Harmen Jan and Johanna had 13 more children together, although 2 of those children died very young: 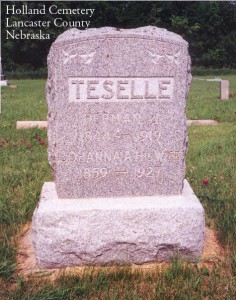 The bold surnames above are for spouses of the TeSelle women. These surnames may be associated with some of  Harmen Jan te Selle’s descendants, so watch for those names in your genealogy records. When you follow the links above to visit the Profile pages of Harmen Jan’s children, you will see that we do not yet have a lot of information about most of them. We hope that you, the reader, will be able to provide us with some history and memorabilia about one or more of these TeSelle ancestors.  In addition to the Profile pages, please follow the links to the Harmen Jan te Selle family Gallery and to other Related Content listed below.

In Harmen Jan te Selle’s Last Will and Testament, HJT carefully directed that specific parcels of land be given to certain of his younger sons, and that cash and other assets be given to the other children to approximately equalize the overall distribution of his estate among all his children, male and female. As you read his Will, think about how much Harmen Jan’s attitude toward inheritance differed from the prevailing European attitude of primogeniture, which Harmen Jan had grown up with — basically, the oldest male child inherited everything, and the rest of the children got nothing.

If you have photos, memorabilia, stories, or other information that you are willing to share, and that might be of interest to other family members, please let us know by using the Contact Form, which will be a private message to the website authors. We will send you instructions and a private link so that you can send us your information and digital files.