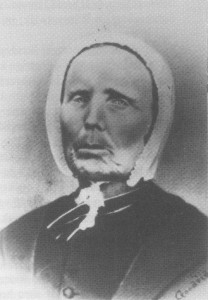 Janna te Selle was born in Woold, Winterswijk, Netherlands, on 19 September 1796, the daughter of Teunis te Selle (1765-1822) and Dela Wilterdink (1768-1803). She was baptized in Winterswijk on 25 September 1796. Janna and her younger brother Jan Albert te Selle (1800-1845) were the only children from Teunis’ marriage to Dela Wilterdink. Dela died prematurely at the age of 35. Teunis remarried Janna Gesiena Esselinkpas (1779-1842), and they had four more children who lived into adulthood.

Janna te Selle married Gerrit Willem Bloemers (1794-1889) in Winterswijk, Netherlands, on 2 June 1819. The couple and five of their six children emigrated from the Netherlands to Wisconsin, USA, in 1846. Their oldest daughter emigrated later with her husband, Jan Hendrik Wilterdink, after they married in 1847. They all eventually settled in Holland Township, Sheboygan County, Wisconsin. Gerrit Willem was a farmer near Gibbsville, Sheboygan County, Wisconsin.

Gerrit and Janna had six children, whose genealogical data is listed in a Family Record sheet provided to us by Ione Heinen of Oostburg, Wisconsin.

All of the Bloemer children were born in Winterswijk, Netherlands.

If you have photos, memorabilia, stories, or other information that you are willing to share, and that might be of interest to other family members, please let us know. You may send a message using the Contact Form, which will be a private message to the website authors. We will contact you about how to share your information.