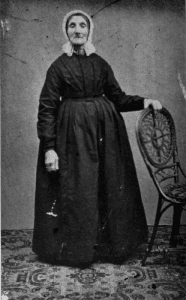 Dela ten Damme te Selle was not a te Selle by birth, but rather by her marriage to Jan Albert te Selle (1800-1845). Nevertheless, she had a powerful influence on her seven te Selle sons, and by extension, a profound impact on hundreds of her te Selle descendants, both in the Netherlands and in the United States.

Dela ten Damme was born in Het Woold, Wintersijk, on June 1, 1802, on the farm called “Het Damme.” Her parents were Albert ten Damme and Hinders Nijhof [1. Ancestry.com. Web: Netherlands, Genealogie Online Trees Index, 1000-Current (database on-line). Provo, UT, USA: Ancestry.com Operations, Inc., 2014.], who were simple farmers in the Winterswijk area, just like most of the rural people in that region.

Unfortunately, Dela’s husband Jan Albert died prematurely in 1845 at age 45, leaving Dela to manage the farm “De Selle” and to raise her seven young sons, ranging in age from the oldest, Derk Willem, who was 18, down to baby Harmen Jan, who was only one year old. Fortunately, the family was able to stay as tenants on farm “De Selle,” where they had enjoyed an amicable, long-standing relationship with the landlord, Jan Albert Bennink. However, all alone and without the support and guidance of her husband, Dela ten Damme te Selle had the enormous burden of providing food, shelter, and a future for her young family.

Dela remained on the farm “De Selle” for 16 more years, while her young boys grew to become men. During that period the four older sons married — Derk Willem in 1855, Tobias also in 1855, Hendrik Jan in 1859, and Jan Albert also in 1859. Since he was the oldest son, Derk Willem remained on farm “De Selle,” preserving the family’s farming tradition and livelihood. The other three sons moved with their new wives to other farms in the area. The three younger, unmarried sons remained at home on farm “De Selle,” helping their mother Dela and oldest brother Derk Willem with farming chores and other odd jobs to support the family.

The owner of farm “De Selle,” Jan Albert Bennink, had a daughter named Janna Willemina Bennink. Janna Willemina married Jan Hendrik Hijink around 1849. Between 1849 and 1858 the couple lived first at “Wevers” and later at “Buitink.” During that time the couple had four children together. In 1861 father Jan Albert Bennink decided to sell the farm “De Selle” to his son-in-law, Jan Hendrik Hijink, as a way to further join and strengthen the bond between these two prominent Scholten families — Bennink and Hijink[2. Jan Hendrik Hijink (19-Mar-1827) born at Buitink, Kotten,
son of Derk Willem Hijink and Janna Geertruid Sikkink

In spite of the urgency of moving from farm “De Selle,” Dela ten Damme te Selle was astute enough to realize that she did not want to become the tenant on a farm owned by another Scholte. As explained in the website page called “Winterswijk Land Owners” (“Scholten”), tenancy contracts with Scholten often had become very short term and were heavily biased against the tenant.

Fortunately for Dela, many people from Winterswijk had joined the emigration movement to America. Consequently, there were many vacant or abandoned farms that were available. Dela looked carefully and found three farms that were suitable. She chose a farm in Kotten called “Fökkink,” which was owned by a physician named Steven Jan Goossens, who was not a farmer and who lived in the town of Winterswijk. Goossens did not demand an unfriendly, onerous tenancy contract, and in fact, offered Dela and her boys the opportunity to eventually buy the “Fökkink” farm and control their own destiny.

Dela ten Damme te Selle moved to “Fökkink” in 1861 along with oldest son Derk Willem, his wife Janna Berendina Weerkamp (1822-1877), and their three young sons. In addition, Dela’s younger sons, Jan Hendrik, Gerrit Jan, and Harmen Jan, were still living with their mother Dela on farm “Fökkink.” However, the time was drawing near when these three young men would need to decide what they were going to do with their lives.

As described on the website page called “The Right to Stay,” the “Fökkink” farm property and most of the other assets were given to the eldest te Selle son, Derk Willem. The other brothers inherited little and had to fend for themselves. Some of the older brothers decided to pursue careers in weaving, shoemaking, or carpentry, or become hired farm workers. However, the three younger brothers — Jan Hendrik, Gerrit Jan, and Harmen Jan — all decided to join the emigration movement to the United States during the years 1820-1870. These younger brothers were farmers at heart, and felt that the opportunities in the United States were much better than the opportunities to be found by staying close to home in the Netherlands.

We cannot know how Dela felt about her three youngest sons leaving the Netherlands, probably forever, to create new lives in the United States. However, we know that Dela was an astute, pragmatic mother, who probably realized that there were few promising opportunities for her youngest sons if they remained in the Winterswijk area. She had instilled in them a strong character, a solid work ethic, and a thorough knowledge of farm life. She must have felt confident that if there were, in fact, good opportunities for farming in the United States, her boys would take every advantage of those opportunities.

Dela ten Damme te Selle lived for 81 years, until her death on March 26, 1883, at the “Fökkink” farm. During those years she corresponded regularly with her three sons in the United States (see “Letters from America“). She also had the opportunity to visit her sons in Nebraska in 1878 (see Letter 19). She must have been very proud of the lives that each of them had created for themselves and for their families. Although Dela probably never thought about it, there are hundreds of her American descendants like me that owe a debt of gratitude to her for raising those three young emigrant sons — Jan Hendrik, Gerrit Jan, and Harmen Jan. She wished them “godspeed” as she sent them off to America, where they created productive, prosperous lives and families, and gave all of us strong ties back to Dela ten Damme te Selle and to the te Selle family in the Netherlands.

For further discussion of Dela ten Damme te Selle and her family, see the website section called “From Kotten to Wisconsin and Farther to Nebraska.“