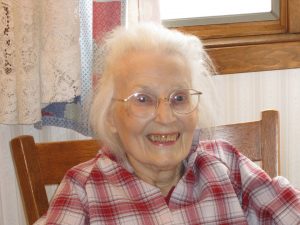 Norma Norvella (Te Selle) Prophet was born on July 26, 1923, in Firth, Lancaster County, Nebraska to Benjamin F. and Alma (Dietz) Te Selle. She died on December 17, 2009, in Lincoln, Lancaster County, Nebraska, at the age of 86.1 As with all of us, the importance of her life was not the dates of birth and death, but rather all the people and events that she experienced and enriched in between.

According to Norma’s obituary in the VOICE News,2 during World War II, Norma served in Navy WAVES3 (Women Accepted for Voluntary Emergency Service) from September 1, 1944, to July 24, 1946.

Norma TeSelle married Russell E. Prophet on October 31, 1946, and enjoyed 58 years of marriage until his death on September 23, 2005. Norma and Russell had two children, Su Zanna and Robert. Norma retired as executive secretary of Sweet Adelines International Headquarters (1961-1976) in Tulsa, Oklahoma, in order to complete her Bachelor of Fine Arts (BFA) degree in painting, graduating with honors from University of Tulsa in May 1977 at age of 53. (See an example of Norma’s artwork.)

Norma and Russell Prophet moved to Firth in 1977, where Norma was a feature writer and cook-of-the-week columnist for VOICE News from 1987 to 1999. Norma was an avid genealogist on three te Selle brothers who came from Winterswijk, Netherlands, to the Firth/Holland area of Nebraska. She wrote a series of columns in the VOICE News highlighting the many letters that were written by the three te Selle brothers back to their mother and brothers still in Winterswijk, Netherlands. Norma also gathered genealogy material on her Dietz ancestors who came from Gebersdorf, Germany, and homesteaded in Firth. Norma was a talented seamstress, painter, writer, and singer. She was an active member of Firth Reformed Church.

Any one of these careers and avocations would provide plenty of interesting information about Norma. For purposes of this TeSelle family website, we will focus first on Norma’s untiring efforts to gather historical information about the three te Selle brothers who immigrated to the United States from the te Selle family farm near Winterswijk, Netherlands. According to her daughter, Su Zanna, Norma began researching the history of the Te Selle family in 1958. Norma realized her dream of a Te Selle family reunion on August 12, 1989, when the “Reunion of Descendants of Three Pioneer Te Selle Brothers” was held in Lincoln, Nebraska, attended by more than 230 descendants! Thanks to the efforts of Su Zanna Prophet, we still have all the reunion materials, which have been scanned and digitized for use in this TeSelle family website. Please take some time to explore these resource documents and images from the TeSelle Family Reunion of 1989.

Please explore the documents listed below as “Related Media.” These provide interesting information and fascinating insights into the life and accomplishments of Norma TeSelle Prophet.